Our first seminar with Measuring the ANZACs data

In our first blog post introducing Measuring the ANZACs to the world we told some of the story of the Dibble brothers from Auckland.

The story of the Dibble brothers from Auckland (New Zealand) illustrates some of the questions we will explore using data from Measuring the ANZACs. Victor Thomas Dibble, along with brothers Ralph Ambrose and Jesse Cyril enlisted together in the NZEF in 1916. Victor and Ralph were both bankers, while Jesse was a farmer. Their serial numbers were sequential, 26571, 26572, and 26573. Portions of their service files are mistakenly interleaved with each other. All three served in France in the New Zealand Rifle Brigade. 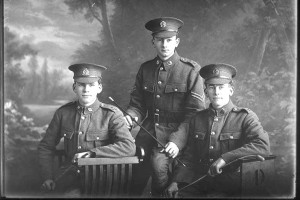 Jesse’s service was marked with both distinction (receiving a Croix de Guerre from the Belgian government) and disciplinary issues including overstaying and drunkenness. Ralph’s service was more ordinary than his brothers, staying in service until the end of the war. In 1917 he was evacuated to England for treatment of a lacerated hand suffered when trying to open a bottle by banging it against a bank. Letters in his file show that despite the incident being his own fault he was not disciplined and given base duty while he recuperated. Victor meanwhile was injured in action by a shell, and had his left leg amputated. He recuperated in England at Oatlands Park, and returned to New Zealand in February 1919. All three had survived the war unlike 18,166 of their compatriots.

Victor married in 1927, and his rehabilitation training helped him gain a job as the Secretary to the Manawatu Racing Club in Palmerston North three years later. But in 1932 Victor’s body was discovered on the grounds of the race course. He had shot himself. More than a decade after the war ended it still enacted its toll on New Zealand’s soldiers. Jesse Dibble served in World War II and lived to be 81, while Ralph returned to his job in the National Bank and lived to age 93. The story of these brothers who grew up together, enlisted together, fought together, and came home together encapsulates many of our goals in Measuring the ANZACs.

Studying suicide in returned soldiers was not part of our original research plan in the project that led to Measuring the ANZACs. But we found interesting stories that spoke to the larger issues we were interested in about how war affected men’s health in the long-term, and the data in New Zealand is quite good for asking about suicide in particular.

But we have a relatively small sample of men whose lives we have traced in depth, and we need a larger sample to more effectively study suicide. Suicide is relatively rare, so we need large numbers—the complete transcription you are helping us with—to find the stories of men who later took their lives.

On Talk several people have pointed us to files where there is evidence of post-war suicide by men who survived the war. We were able to then look at these files and think about these men’s stories in comparison to the group whose information we’ve already collected. Today we presented a seminar about suicide in World War I soldiers, and included some of the stories that you, our citizen scientists, have turned up on Measuring the ANZACs. So, thank you, your work is helping us with our research.

But … we must do more. Our understanding of suicide will be tremendously improved by the data from the History Sheets and the Statement of Services telling us what experiences men had in the war: their wounds, sickness, and the units and battles they were in. This is data we don’t yet have, and we must transcribe.

Our research on suicide stands only as an example of the kind of research that can be done with a complete transcription of these records where we can connect people to their families, to their peers in the same military units, and find rare stories. 125,000 New Zealand men served. If we have stories about things that happened to 1000 or 2000 men we can find them with a complete transcription. Onwards with Measuring the ANZACs, and thank you.