Lets put that in perspective — 40% more data has been transcribed in just over 4 months, so we’re doing even more than we were achieving in the last few months of 2016.

One of the best ways to see this is look at the weekly rolling average of daily transcriptions. This helps smooth out the day-to-day variation but also see short run changes and trends. These help us keep an eye on how we’re engaging the community. If you’re not coming back to help tell the stories of these soldier’s that’s a worry! 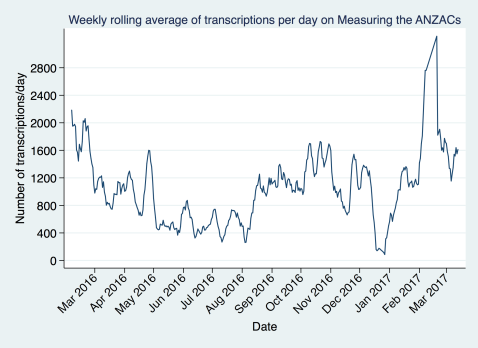 You can see that we kept up the steady pace of transcriptions we’d started achieving from August 2016, and what’s really encouraging is that people took a break for Christmas and then came right back to it during January. This is great, and gives us some quantitative evidence that we’re building a good community of people transcribing with us. We had a class working on the site in early February (and we’ve taken out the spike right before they had an assignment due!) which has helped us out.

On average we’re getting through 1600 fields transcribed a day. This is great, and is the equivalent of about 6 soldiers’ files being completed each day. One thing we’ve noticed is that the History Sheets, which appear first, are the most worked over. We really need people to work through a whole file if they can. Eventually History Sheets will be retired when everything has been marked once and transcribed three times. But with the incredible levels of accuracy you’re achieving we can make great use of the first version of a transcription. So the more our transcribing forces can spread their effort through a file the better!

Thanks for all that you do! Lets keep going and the more you can recruit others to join the Measuring the ANZACs forces the quicker we’ll complete our journey.