Why are there sticky notes on the history sheets?

The material we are using in Measuring the ANZACs is relatively complex. Across 140,000 different files there are around 4 million page images. Thus each file is nearly 30 pages long. The 140,000 distinct personnel files represent a smaller number of distinct individual people. Some people served in both South Africa and World War I, and ended up with distinct files. A more common reason for the existence of multiple files about the same person is that people tried to enlist multiple times. Particularly in the early years of the war the research team has observed people trying to enlist years before they were of age to enlist. These men, teenagers when they first tried to enlist, show up in different attestation files with the same day and month of birth and a different year than in the subsequent (successful) enlistment. The New Zealand Army tried to merge files that were clearly the same person, but did not manage to do it all. One of the outcomes of Measuring the ANZACs when we have completed marking and transcription for all the files, is that we’ll be able to make some educated guesses about people who are really the same person.

So we have a lot of pages and a lot of different people, some of whom might not be different. The complexity that requires citizen science is apparent again looking at the pages. The different files have a widely varying number of pages in them, from just a couple to over a hundred. Someone who enlisted late in the war and saw no active service will tend to have a short file. Someone with longer and more eventful service will have hundreds of pages.

Thus the first task for citizen scientists is to identify what’s in the files. What kind of documents do we have? This is the scientific rationale for the marking process, helping us work out what material we have. We are identifying a small number of the basic documents that most files should have—an attestation form from enlistment, a service history form, and notifications of death. You will notice that on the second page of the history sheets where the “Statement of Services” is recorded the second half of the page is a record of Conduct. Or really, misconduct. At the moment we are just asking for your involvement in marking the Conduct incidents, but not transcribing them. We hope that we can use this identification of the conduct incidents to sample these pages later on in the project and enable research on misconduct during the war.

Misconduct was not uncommon among a hundred thousand men serving overseas. Our introductory post, for example, mentioned the Dibble brothers and their service that included medals and conduct citations for drunkenness. But misconduct was uncommon enough that it doesn’t appear in every file. We just won’t know until we’ve worked our way through the files. The National Library of New Zealand has scanned the reports of the Defence Forces, and they report more than 1,000 prosecutions in the Territorial Forces each year during the war out of 30,000 territorials. We aren’t sure about misconduct in the Expeditionary Force when men served overseas. In any case this suggests misconduct may be recorded in around 5% of the files. This is an example of the complexity of the material that we have to work with, but also the richness and potential for telling the life stories of these men.

The richness and density of information in the files also gives rise to the “sticky notes” you will see on many history sheets.

An example of a sticky noted History sheet.

You will nearly always see a sticky note on the front page of a History sheet. Let me rephrase that. Having looked at thousands of files I’ve never seen one anywhere else. It’s theoretically possible they exist on other documents. Please tell us in the discussion forums if you find another type of page with a sticky note on it!

Look closely at the content of the sticky notes and the content of the History sheets, and you can begin to see the history of these files themselves as working documents for organizing the administration of soldiers in service and as returned soldiers (what Americans would call “veterans” New Zealanders and Australians call “returned soldiers.” The organizations of these men are the RSA in New Zealand and the RSL in Australia). Looking closer at the sticky notes you can see that they summarize the length and places of service. They clearly had a role in the Defence Forces’ processing of medals and pensions. They allowed clerks to quickly see how long a man had served, whether a file had been processed and what actions had been taken. 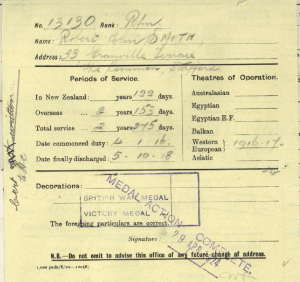 Like modern day sticky notes these sticky notes contained a summary of information or instructions to action based on the material underneath. It was important not to obscure the information underneath, so only the top of the paper was stuck down. Sticking the paper down with paste also meant that the files were not damaged with pins or staples. These files are now nearly 100 years old in parts, and the paper has not been visibly degraded by the sticky notes. As archivists and historians around the world will tell you pins, staples and rubber bands can do tremendous damage to paper files. In even a slightly damp environment pins, paper clips and staples will start to rust within a decade and damage the paper. So we should be grateful that these files have sticky notes.

The sticky notes presented a technical challenge for both Archives New Zealand (an important partner in Measuring the ANZACs) and the Zooniverse team designing the website. For Archives New Zealand the question was how to scan the material without damaging it, and also present all the information to readers. In the reading room you can lift up the sticky note. There is, as yet, no way to do that in a scanned image! Archives’ solution was to scan the pages with sticky notes multiple times lifting the notes up to reveal the information underneath. Thus, for a History sheet with two sticky notes it may take 3-4 scans to show the whole page including material underneath.

Use the Lightbox feature in the Mark interface to see the next pages. When you see a History sheet with a sticky note, you will see the same page repeat several times to capture all the information. Thus in the Mark workflow you may need to mark several different images to capture the information off what is, in physical form, just one piece of paper. The key to this process is our question to you: Are there any sticky notes. This helps us work out what to do with the page when processing the data. 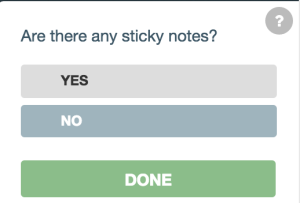 Seemingly banal, the sticky notes on the History sheets shed light into the working lives of these files as government documents about peoples lives, and also show some of the issues archivists and the research team have had to think about in bringing Measuring the ANZACs to life. As always, if you have questions, bring them to the discussion forums.

3 responses to “Why are there sticky notes on the history sheets?”